A key CAAFI® priority is to foster the near-term commercialization of Sustainable Aviation Fuel. CAAFI works closely with stakeholders from all parts of potential state or regional supply chains to identify, evaluate, select, develop, and execute specific deployment projects that produce Sustainable Aviation Fuel (SAF) and value-added coproducts. CAAFI facilitates connections with relevant resources and authorities (e.g. USDA, state, and local interests) to identify funding opportunities, and also links supply chain participants with the CAAFI network of fuel producing companies and end users. Many of these efforts were begun in concert with the Farm to Fly 2.0 (F2F2) Initiative (the F2F2 Final Report was published in September 2019). These efforts complement the research and deployment activities of FAA’s ASCENT Center of Excellence and the USDA Bioenergy System Coordinated Agricultural Program.

CAAFI is always looking for partners to discuss potential state initiatives, with the goal of having representative projects for various feedstocks or conversion processes in as many places as we, and our collaborators, are able to support. If you are interested in new or existing projects, please contact info@caafi.org.

CAAFI Administrative Leadership team members have been deeply involved in the inception and development of the following projects.

CAAFI's Steve Csonka and Rich Altman, along with members of the Business Development team of Marubeni Corporation (a Japanese industrial conglomerate being introduced to opportunities in the Sustainable Jet Fuel sector), tour the MSW sorting facility in Hartford, CT. 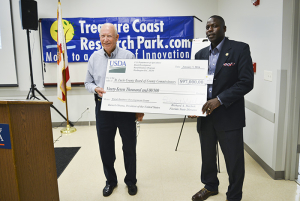 This team is pursuing the development of energy crop substitutes for hundreds of thousands of acres of fallow citrus fields (resulting from citrus blight and greening disease). Using a USDA Rural Business Development Grant (RBDG), the project was launched at the start of 2016 to evaluate the project’s feasibility, with an initial stakeholder meeting of over 50 key contributors from farmers, state and local government, end customers, financing sources, and NGOs. End users engaged in the kickoff included A4A, American Airlines, FedEx, Jet Blue, and military buyer DLA Energy. Fuel processors engaged in the project represent multiple pathways that utilize sugar feedstocks. During the course of the 12 month project, the team identified concepts for crop development and year-round supply chain definitions to enable jet fuel production. In addition to developing a model for a five-year scale-up to support a dedicated production site, the project also sought an early payoff in achieving a first year demonstration of processing sugar beets (Beta vulgaris ssp. vulgaris) through an existing citrus facility. The RBDG grant funded work was completed in the second quarter 2017 and a final report was issued in the third quarter 2017. Communications related to the project included county and CAAFI news postings, a CAAFI blog supporting the effort and proposing its organization as a template for future F2F2 efforts, and a local TV report. As a result, discussions have been initiated to pursue a scale-up effort at a number of potential processors. 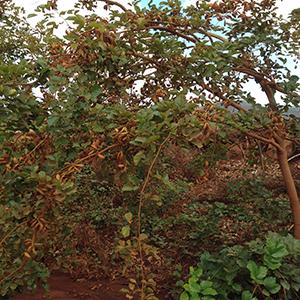 A nut-laden pongamia tree in a research field trial at the Hawaii Agricultural Research Center in Waipahu, HI, 2015. Photo courtesy of Steve Csonka.

Since 2013, CAAFI has been active with members of the U.S. Pacific Command and U.S. Navy’s joint and interagency public-private renewable military mobility fuel procurement initiative, the Green Initiative for Fuels Transition Pacific (GIFTPAC), in evaluating the potential for feedstock and fuel production in Hawaii. In 2016, the Pacific Command and Navy facilitated transitioning of alternative fuels support to civilian-led efforts, becoming the starting point for additional private-sector explorations in this space. This collective has been active in various commercial and policy explorations and initiatives including:

See efforts underway by the University of Hawaii team as part of the efforts of ASCENT.

USDA Rural Business Enterprise Grants funded two now-completed feasibility studies focused on 1) use of woody biomass-based fuels in Clarendon County and 2) the bioenergy potential from algae in Colleton County near South Carolina’s I-95 corridor. Results indicated that lumber industry by-product values remain competitive for fuel projects. Follow-up is being defined for the initial team to continue evaluations on the woody biomass concept, potentially through use of a USDA Value Added Producer Grant Proposal. This would be done in conjunction with several conversion technology providers, and would potentially include the evaluation of location-specific, brown-field sites including abandoned or underutilized pulp and paper or saw mill facilities. Participation is also expected from military customer interests in addition to CAAFI stakeholders in the region.

A USDA NIFA AFRI Coordinated Agricultural Project (CAP) grant was awarded to the University of Arizona for their SBAR project. The project aims to cultivate two desert-adapted crops, guayule (Parthenium argentatum) and guar (Cyamopsis tetragonoloba), as feedstocks for biofuels. Research, development, and deployment activities goals include:

Iowa State University, Pacific Northwest Laboratories, and Mercurius Biofuels Inc. will be engaged midway through the project to scale up bagasse conversion and upgrading to biofuels. CAAFI’s Executive Director, Steve Csonka, serves as Chair of the Advisory team for this program.

A USDA NIFA AFRI Coordinated Agricultural Project (CAP) grant was awarded to the University of Florida for their SPARC project. Agrisoma and ARA are leading the team’s modeling efforts. The team produced a 6-month work plan for developing a southeast-specific supply chain with implementation expected to be initiated in late 2018 in the multistate region including Georgia, Alabama, and Florida. A dialogue was initiated with Florida Wildlife Federation, an environmental NGO, and Florida state government to gain access to incentives since the project feedstock, carinata (Brassica carinata), used as a cover crop, could provide significant value by limiting nitrogen and phosphorus runoff that leads to water pollution in the Gulf of Mexico. Rich Altman, CAAFI’s Executive Director Emeritus, is leading the project’s supply chain development efforts. CAAFI’s Executive Director, Steve Csonka, serves as Chair of the Advisory team for this program.

The CAAFI Administrative Leadership Team contributes to the oversight and execution plans for the ASCENT Project 01 Regional Deployment Projects.

The inland Northwest has the potential to produce a significant amount of oilseeds and has several potential sources of waste FOG. The WSU team has already laid the groundwork for a deployment project in the region, having already interviewed and surveyed stakeholders and assessed waste FOG potential. The project team is currently evaluating potential regional oilseed production, identifying opportunities for a hub-and-spoke type supply chain structure, and assessing the community assets that may enable the development of a deployment opportunity. Expanded stakeholder outreach will identify potential supply chain partners and opportunities for concrete deployment activities.

In 2015, the FAA added the University of Hawaii to the ASCENT Center of Excellence Project 1 team to work collaboratively with other universities in ASCENT Supply Chain Analysis targeting tropical and sub-tropical feedstock opportunities. The ASCENT 01 team is laying the groundwork for a lignocellulosic-focused AJF deployment project in Hawaii. The team has already assessed the potential production of various feedstocks and potential barriers to supply chain development in Hawaii. The team is now assessing the potential to convert construction and demolition waste from Oahu and eucalyptus from Hawaii into lignocellulosic AJF. The team is evaluating stakeholder concerns, collating transportation and other regional data, and assessing technoeconomic viability and life cycle GHG inventories for these proposed supply chains to identify the best near term option for further deployment efforts to follow.

The ASCENT Project 01 team and CAAFI are considering possible supply chain elements and structures to leverage the significant agricultural and silvicultural resources of the Tennessee region. The team is assessing the feedstock production potential, the stakeholder interests and opportunities, social capital assets, and potential supply chain participants to lay the groundwork for a future deployment effort in this region.

In collaboration with several entities in the region, including local, state, and federal interests, CAAFI is working with Pennsylvania State University to formulate a broad approach for addressing the need to reduce nutrient loading of the Chesapeake watershed while simultaneously developing a range of feedstocks (perennials, cover crops) that could be utilized for fuel production.

CAAFI has explored concepts in conjunction with state and Colorado State University interests and the USDA NIFA CAP-funded Bioenergy Alliance Network of the Rockies (BANR) project. Feedstocks of interest include lipids (tallow, oilseeds) and forestry residues.

CAAFI is exploring the potential to partner with the SPARC project.

CAAFI, in partnership with USDA Agricultural Research Service (ARS) and several universities, has initiated workshops focused on the development of a winter cover oilseed, pennycress (Thlaspi arvense), that may fit with the corn/soybean crop rotation prevalent in the region, and be readily adaptable by farmers.

In collaboration with the Great Plains Institute and other interests, several concepts are being explored as integrated projects. The Great Plains Institute is organizing a workshop to look at various perennials and cover crops in the state as part of an effort to help the state government firm up a new program that would provide policy support for more sustainable agricultural solutions. Outreach to commercial entities in the region to gauge interest in the concept has been conducted, including Land O’Lakes, General Mills, and PepsiCo, among others.

A broad team, including ASCENT researchers at the University of Tennessee, Knoxville (UTK), the Commonwealth Center for Advanced Logistics Systems (CCALS), the Center for Natural Capital, and CAAFI participants submitted a full proposal to the 2017 Biomass Research and Development Initiative (BRDI) grant solicitation for hardwood-derived sustainable aviation jet fuel supply chain development in the region (Kentucky, Tennessee, Virginia, and West Virginia). This region has an abundant supply of hardwood biomass, lands suitable for dedicated feed supply production, and is strategically located to serve east coast end-users. A second proposal by the same team and the University of West Virginia was submitted to the U.S. Forest Service’s 2018 Wood Innovation Grants (WIG) for biorefinery co-product market development. Beyond its regional importance, these efforts represent a new and significant collaboration between the F2F2 state teams and ASCENT.

The Virginia F2F2 team is seeking funding through a Center for Innovative Technology (CIT) Commonwealth Research Commercialization Fund proposal to build resilient woody biomass-based supply chains in the state. This approach is supported by the results of a previous CIT-funded study, which analyzed various aviation biofuel pathways to determine commercial viability within the Commonwealth and to implement a F2F2 program in Virginia. That study showed robust woody biomass supply quantity and cost viability in Virginia. The VA F2F2 team is also seeking funding through the Appalachian Regional Commission (ARC) for a site selection project in Southwest Virginia (SWVA). The proposal will be both a companion approach to the broader BRDI proposal for the Central Appalachian region and will stand on its own as a planning activity to enable and facilitate biorefinery siting options in SWVA for lead processor candidates. This effort is the first formal joint ARC/F2F2 proposal facilitated by ARC and CAAFI dialog. The team is now considering opportunities to expand their focus from SWVA to provide an alternative to recently lost pulp and paper processing capacity in central Virginia. Significantly, the location coincides with pipeline pumping stations, access points for the entire northeast.

For more information on any of these initiatives, please contact info@caafi.org